The previous encounter saw Route 1 take the win by 2 goals, so this match was always going to be a well contested game.

This young Simcocks team have continued to impress this season and today was no exception, through some impressive shooting from Poppy Bowman (GS) and Poppy Irving (GA) they made their opposition work hard.  An experienced Route 1 team denying them space as they piled on the pressure leading at the first quarter break by 2.  Fresh from her Senior Island Netball team call up, the ubiquitous Rhi Evans (C) linked defence and attack with speed, agility, and some lovely quick flowing netball.  Route 1 capitalised on a few errors by the Simcocks girls and through great defensive work by island duo Cassidy Pizzey (GD) and Paige Skillicorn (GK) they increased their goal tally by 9 at the half-way mark, leading 18-12.

The third quarter saw some excellent contested netball with Claire Mason (WD) making some good intercepts and linking well with Sophie Howland (C) in mid court to keep the pressure on the Route 1 defence and keeping the quarter score to 6-8 with Route 1 leading 26-19 going into the final quarter.  Some fine shooting from Island regular Kat Keeling (GS) kept Route 1 ahead, with them taking the win 36-26. POTM went to Rhi Evans.

The game was very evenly matched in the first quarter with some good interceptions from both the defensive teams from Simcocks (Megan Holland and Anna Munro) and Atla (Caroline Maddrell and Breeshey Harkin) kept the scores low. An injury late in the first quarter saw Caroline Maddrell replaced by Zoe Shimmin-Mann and what was a very frantic quarter ended 4-2 to Atla Pumas.

Atla dominated the play in the second quarter, some fabulous feeding from Carly Craine,Ellie Looney and Rachel Edwards, into the well oiled shooting team of Alex Cashin and Hazel Bailey saw Atla extend their lead to 13-2 at half time.

Simcocks came out strong in the third quarter, with Rachel Craig taking to the court as WD. Georgia Mitchell – centre along with Emily Osbourn controlled the ball well around the circle edge to feed into Roviana Szetu and Hannha Skehan but this was not enough to stop Atla extending their lead to 25-7, at the end of the third quarter.

Simcocks remained determined and continued to work hard into the final quarter, passing it around mid-court whilst looking for an opening to their shooters. However, some fabulous interceptions by Zoe Shimmin-Mann in the final quarter assisted Pumas in securing a 32-10 victory.

Going into this final match, Castletown Celts were looking to finish the season undefeated but knew that Manx Gems Emeralds were not going to make it easy.

It took a few minutes for both teams to settle, but Celts quickly found their rhythm and soon took the lead with the shooting duo of GS, Nicky Corrin and GA, Sarah Cutts on form. The first quarter ended 7-3 to Castletown.

In the second quarter, Gems started fighting back and their attack lead by their C, Dawn Quinn and WA, Lynette Corran were finding their flow and feeding their shooting circle, which closed the gap 12-8 but still in Castletown’s favour.

In the second half, both teams came out fighting and the quarter was played goal for goal. In defence, Sabrina Crowe and Jess Hawkins for Manx Gems and Holly Renshaw and Holly Charmer for Celts both put the pressure on their opposite numbers. The quarter ended 17-14 which was making for a tense final quarter.

Castletown approached the final quarter with determination, which they have shown all season. With some key interceptions, Castletown’s flow throughout court, by Hayley Duffus, Rebecca O’neill and Leanne Smiley set their shooters up perfectly to convert for the win. The well-deserved POTM went to Castletown Celts (GS)  Nicky Corrin. 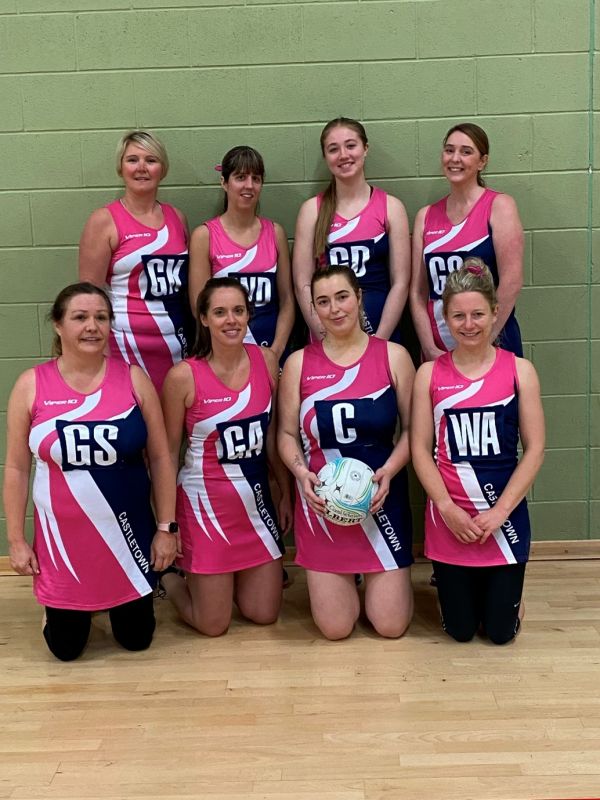